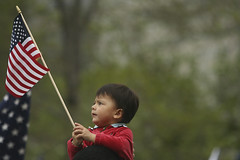 As with the past 10 years, this upcoming September 11th marks the anniversary of the horrific attacks on the World Trade Center. Many of us can still vividly recall exactly what we were doing at the moment this occurred. For me, I was awakened at 5:45 am with a phone call from my mother telling me to turn on my TV immediately. I watched CNN and saw the second airplane hit the building on live television. I watched the towers crumble and our world as we knew it forever change. I was living alone in Los Angeles and that day, the whole city shut down out of fear that we would be the next target.